Visiting the Ice Castles in Midway

We felt fortunate to get a chance to see the Ice Castles in Midway on Monday because today was their last day open. I didn't put it off, we only got our vouchers last week and with the wedding we were pretty stuck until Monday. 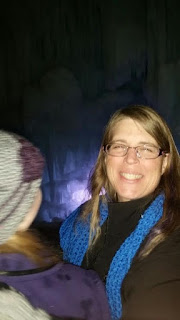 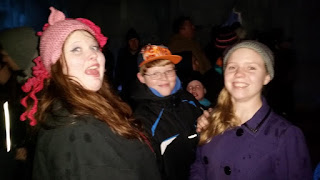 We left at 6:00 for our 7:30 - 8:00 time slot and we got there with just a few minutes to spare. Some of the kids had been there before and really enjoyed it, others were not listening when I told them to dress warmly and they suffered a bit from the cold. 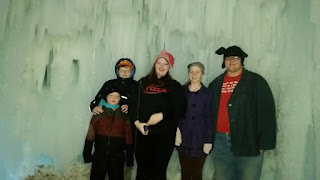 We didn't have to wait in line for more than a minute or two before we were inside the castle. It was a bit unnerving to have water dripping from these huge icicles overhead, but none of us suffered injury. I only had one minor bout of claustrophobia in the slot canyons and that is because the people in front of us stopped and for about 2 minutes I felt completely trapped. Someone suggested I look up and the night sky was beautiful and huge above us and that helped until the line started moving again. 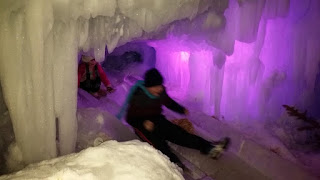 Baby Doll loved the small slide! She went down 5 or 6 times until she complained that her pants and gloves were wet. The bigger slide was already closed for the season, so we didn't get a chance to try it although it looked like we could have spent hours there. My favorite part was actually watching the fire twirlers. Since it was dark while we were there, it was even more stunning. 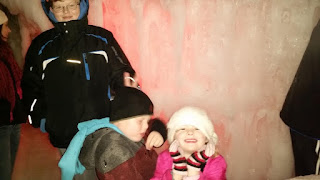 We only stayed for about an hour because some of the kids were getting cold although really, we had seen everything we wanted to see. I seriously had no desire to go back into the slot canyons and even my little ones got tired of exploring. Although it was pretty late by then. In my defense, I had originally procured tickets for the 4:30 hour and I think that would have been much better for my small ones on a school night, but because of the weather we were asked to trade our tickets for later ones.

But then the fire spinners wouldn't have looked as amazing in the daylight and neither would the lights that were embedded in the ice.

***We were given 6 free tickets for our honest review of the Ice Castles. No further compensation was given.***